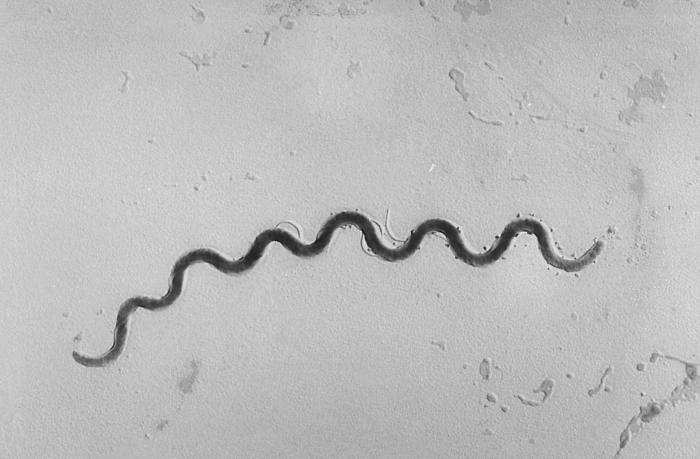 A stillborn baby boy was delivered at the hospital to a mother who was HIV positive and pregnant with twins. The mother was started on highly active antiretroviral therapy (HAART) in her second trimester. She went in to labor 5 weeks early, at 35 weeks. The other twin was born alive. At the time of delivery, the cause of stillbirth was unknown.

An interview with family members after the stillbirth (a verbal autopsy) indicated that the mother thought the baby suffered an injury during delivery that led to the stillbirth.

Blood, spinal fluid, and tissues of the stillborn baby tested positive for Treponema pallidum, the bacteria that causes Syphilis.

Syphilis is a serious bacterial infection that is sexually transmitted and can be passed from a pregnant mother to her unborn baby. It is a cause of stillbirth. Because syphilis is treatable with penicillin, the World Health Organization recommends that all women be screened for syphilis during pregnancy.

Pathology confirmed that Syphilis was the cause of the stillbirth with the bacteria, Treponema pallidum, found in all of the types of tissues collected – liver, lung, brain, placenta, and umbilical cord.

The CHAMPS team provided these results to the mother to ensure that she and her living baby were treated for syphilis. Neither of them had developed symptoms and both were doing well.

This mother now knows what happened to the baby she lost even before its birth, and she and her living baby are healthier as a result.

The local CHAMPS team learned that there had been a shortage of syphilis testing kits that prevented this mother from having the recommended prenatal tests, even though she had regular visits with her doctor during her pregnancy. The CHAMPS team identified a problem that local health authorities will be able to correct within their health system, preventing other families from experiencing problems with getting syphilis testing in the future.